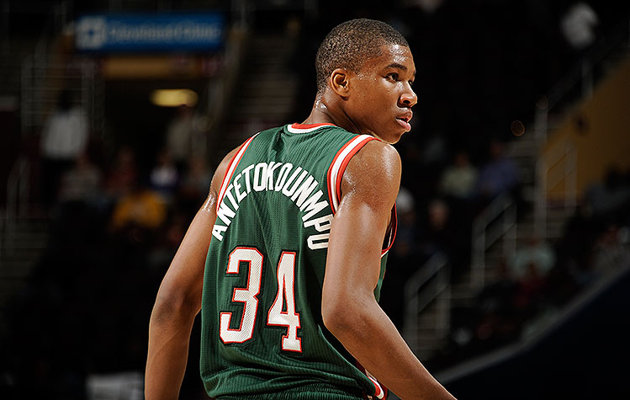 In less than four years Giannis Antetokounmpo of the NBA’s Milwaukee Bucks has not only won his place in the fiercely-competitive world of American pro basketball—but also gotten his fans to pronounce his name—a tongue-twister even by Greek standards.

He was also voted among the top five players of the Eastern Division in the All-Star Game.

Along the way Giannis has also brought joy and pride to hardship-stricken Greece while making new and numerous friends in the US.

In fact Gianni’s life is a Cinderella story: he is the son of immigrants from Nigeria who for years tried to survive working odd jobs. He tried to fit in, but he truly found his salvation at the famous basketball court in Triton.

The “Greek Freak” of today who may one day claim his place among the NBA greats would probably never be an NBA star without Spiros Veliniatis. This is the man who not only believed from the beginning in the17-year- old Giannis, but did everything to convince him and his family to take basketball seriously.

“When I met Giannis, he loved soccer and was dreaming of a career in it,” his former coach says in an interview with NEO. “It was extremely difficult for me to change his mind. His parents were not able to understand the true gift of their child. They were very poor: I saw their inability to make a living and I tried to do the best for them and Giannis. I told them I would find them a job if Giannis started playing basketball.”

But Giannis wasn’t thrilled about training at first. As his 48- year-old coach admits, Giannis often skipped practice to help his parents. “So together with Mr. Loukas Karakousis – the Inspector of the Filathlitikos team-we decided to help the family so Giannis could train,” says his coach.

Loukas agreed to give them 500 Euros per month. “I was very sure about Giannis and I knew that in the end the ‘investment’ would pay off. And I remember in an interview Giannis said he was now committed to basketball. That’s when I knew that I had done the right thing.”

Only he might have been alone: many people in Filathlitikos did not believe in the talent of the young player. “He didn’t even know how to dribble the ball. Also, he wasn’t very tall: at age 17 he was only 1.90. But in the coming years he didn’t stop growing.”

And growing as a person. Veliniatis says the difficulties faced by the Antetokounmpo family played a key role in the brilliant ascent of Giannis in the basketball world. “This family had serious survival problems and did anything to earn a wage. The fear of the extreme poverty that Giannis had experienced was the biggest motivator,” he says. “Because of it he listened and worked. All we did was spot the talent and give him the technical skills. Going to the NBA from the poorest streets of Athens is equivalent to sending a man to Mars or to the moon.”

And Giannis hasn’t forgotten his roots even with NBA stardom. “He was something like father for his family. Giannis has never been a child. Maybe now he can enjoy life a little more.”

“NOW WE DON’T COMMUNICATE AT ALL”

Veliniatis has no Internet at home so he goes to the nearest Internet café to see games of the Milwaukie Bucks and the highlights of Giannis’ performance.

“I am very glad and really proud of him,” says his old coach. “Even before Giannis I met some pretty talented immigrant children, but the ordeal was too much and some committed suicide or got into drugs. Having seen this I decided to ‘sacrifice’ myself for somebody like Giannis. Especially for three years in the beginning it was like swimming in an ocean: I had not only to convince him and his family, but my parents were severely ill at the time.”

Veliniatis says he’s now lost touch with Giannis and his family and the last time they spoke was last summer when Giannis and his brother Thanasis came to Greece. “Giannis had to deal with so many people. He said he would call me, but since then we have lost touch.”

Veliniatis says Giannis will have to stay grounded to withstand the pressure of the NBA. “He definitely has the mind to keep the balance needed. We will see along the way,” he says.

As for the comparisons Americans make between Antetokounmpo and other international stars of basketball, the 48 year old coacher believes that Giannis will reach even greater heights than Lebron James of the Cavaliers. “My only fear is how he will manage himself off the court. Inside the stadium I’m not afraid of him. His family and friends have to be his support system and his base. Giannis has huge potential. It used to be Onassis (the number one Greek celebrity), now it’s Antetokounmpo. He is the number one export of our country right now,” the coach says, recounting an incident in Copacabana ”when some Brazilians heard that I am Greek, they asked immediately about Antetokounmpo. This is incredible.”

NO HELP FROM THE STATE

To help other migrant children, Spiros Veliniatis now maintains an association with 90 girls and boys from Africa, each of whom he tries to help in life as well as sport.

His other discoveries include Michael Afolanio -the first African Greek, who also addressed the Greek Parliament; and Paul Jones, an officer in the Greek army, and many others.

“This is something I inherited from my German mother who was responsible for personnel in a large company and was supervising 5,000 employees. She used to take me with her since I was a kid and it really helped with my life as it seems”.

The reason why for so many years he has chosen to help the African community in Greece is that it is even more difficult for them to assimilate in a country like Greece. “Children among the Balkan countries have a predisposition to understand how Greece works, so as not to require much help. Immigrants from African countries, however, cannot decode the Greek society in which their family is asking them to live.”

His only complaint is that in all these years he’s had no support from the government. “There’s a lot of talent out there, but I’m fighting by myself. There is no need for the State to help financially, but it could help with publicity, such as offering an award, for example.”