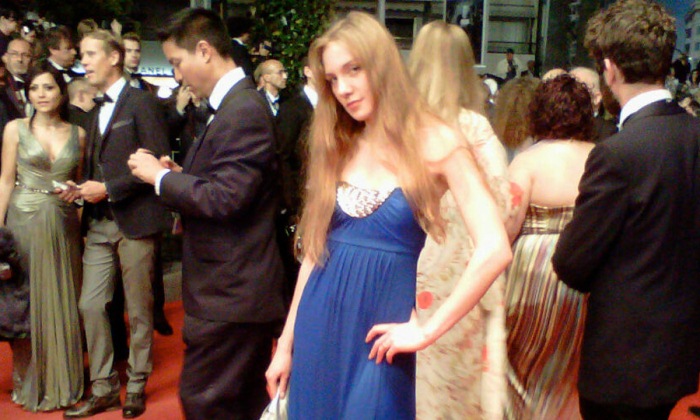 Published at NEO magazine
The musical rhythm of the event was given by Alexandre Desplat, the distinguished French-Greek composer who scored “The King’s Speech” and “The Tree of Life.” Alexandre had five films featured in this year’s competition including the “Un Certain Regard” category.
The Greek youth, talent and beauty also impressed the world’s leading celebration of the seventh art. One of the most spectacular images that stood out was the 21 years-old young actress Anna Rezan Kritseli who first appeared on the big screen at the age of 14, but the biggest hit came in the past two years, thanks to her participation in the American film ”La Commedia di Amos Poe” by the leading character in “No Wave Cinema”, Amos Poe. Recently, she appeared at the Italian hit film ”Immature il Viaggio” made by the great director Paolo Genovese. A few months ago we saw her featured on IMDB’s list with the most beautiful and young actors of the planet. The Greek beauty chose a blue maxi dress with the signing of award-winning costume designer Bianca Nikolareizi.

The other starlet from the island of Creta, Stella Ermi, looked graceful and radiant as she arrived at the festival’s closing ceremony. Stella is a successful theater actress who makes her first steps in cinema by participating in the short film” Hidden Life” , a dramatic thriller created by Dimitris Gotsis. It tells the story of a successful British journalist in Greece. “Hidden Life” was chosen to be screened at the Short Film Corner of the Cannes. The beautiful Cretan impressed with her elegance, wearing a creation by the famous Greek designer Stelios Kountounaris.

Greek productions and films were featured at The Marche du Film (Film Market) as well.

“Meteora”, by Spiros Stathoulopoulos, focuses on a love story between a nun and a monk living in neighboring monasteries in the breathtaking and historic Greek area of Meteora.

“The Unfair World”, by Filippos Tsitos, has already been recognized at several venues such as the San Sebastian Film Festival, where it was awarded the Silver Shell for best director and best actor (well-known Greek actor Antonis Kafetzopoulos).

“Papadopoulos & Sons”, directed by Marcus Markou, is a Canadian production but it features Greeks both in the cast and behind the camera.