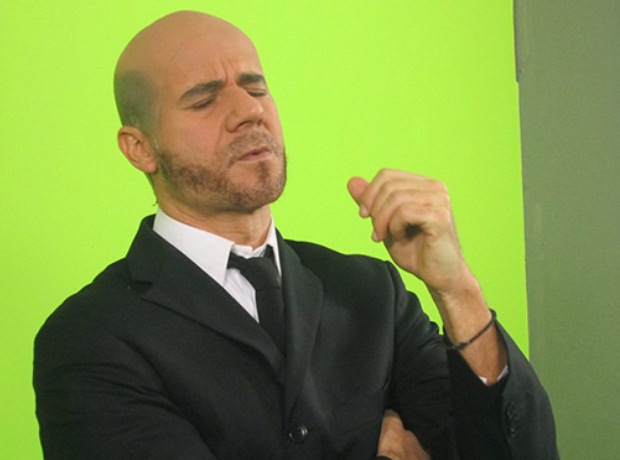 Giorgos Mitsikostas in performance is a feast for the eyes as well as the ears: he can nail a whole imitation just with a facial tic. Which is why he’s a rage on youtube and a rage of the Greek public: they can’t wait to see who Mitsikostas will skewer next from buttoned-down politician Adonis Georgiades to wild-haired sports commentator Takis Tsoukalas.

“I remember myself in the last classes of primary school imitating the broadcasters of mainly sport shows, like Diakogiannis and Mavromatis,” he says. “Later on, while I was at high school, I developed this talent, by imitating my teachers. And this was also repeated while I was studying at the university. This made me make up my mind and follow this profession. I could also say that it is hereditary, because my mother also used to make a lot of imitations”.

But what happens when imitating a specific person is not such an easy job? “Even when one cannot impersonate somebody else exactly, just trying makes it funny,” he says.

For him there are no limits to what impression he can do. “There‘s no I can’t, there‘s only I don’t want to, and as far as I am concerned, I want to do everything. What matters is being willing to imitate somebody, and one day you‘ll make it. I remember myself when I was 25 years old and I was trying to imitate Konstantinos Mitsotakis (former Prime Minister). It is a fact that when one is so young, one’s voice can’t sound like the voice of a 70-year-old individual. But when I got 30, 35, 40, it was easier for me to imitate somebody who was 80 years old, of course.”

He has no favorites—he leaves it to the audience. “The opinions about this differ. Some people tell me that by best imitation is George Papandreou (former Prime Minister), others talk about Nikos Alefandos (a well known soccer coach) and Kostas Prekas (actor turned poet and philosopher). I cannot choose a specific role to be my favorite, I am like singers. If I choose a person and say that this is the best imitation I ever did, it’s going to sound like I am annihilating all the others that I have done.”

Mitsikostas shares laughs, but his satire also has bite. He presented Marika Mitsotaki beating her elderly husband with a stick. “She thought that I was trying to satirize a health problem she was facing, but obviously, this was not my intention.”

Michalis Papakonstadinou, the minister of external affairs during the administration of Konstadinos Mitsotakis in 1992, has also expressed his resentment in a letter to Mitsikostas. “I had imitated him, presenting him as a person who drinks a little more alcohol than normal. Then he was discontented and sent me a letter. We met, we had supper together, and through our discussion we put an end to this disagreement”.

I think that the Greek TV lacks a real comedy channel. One with spectacular, breathtaking shows, where there will also be freedom of speech and expression. In this phase that we are going through, Greece needs that!

Other controversies were not easily resolved. In October 2015, his five-minute humorous radio show on Vima FM was cut from the first day. The second episode in which he imitated Kyriakos Mitsitakis (then candidate for the New Democracy Party leadership) was not broadcast by the radio station and this caused a flurry in the Greek media and social media. Three days later, the head of the radio station confirmed the end of his cooperation with George Mitsikostas, emphasizing that talk of censorship was not really valid and to prove his point he allowed the canceled show to be aired.

Mitsikostas says of the incident: “I was informed that our cooperation would stop, because the sound quality was not very good. I prepared the five minute episodes at home and in my opinion, the sound was very good. I also uploaded the video on my personal profile on Facebook and everybody told me that there was nothing inappropriate in it. I believe that even Mr. Mitsotakis would have no problem at all listening to it.”

The difficulties along the way have not made him abandon satire. On the contrary, he wants to create a comedy channel for Greece. As he told NEO Magazine, he believes that he himself has got the experience and the skills necessary to do it on his own. “I would really like it if something like that happened in our country and I believe that I can make it. I would choose surprise-persons, who would be able to present informational and satiric shows, without being necessarily reporters or journalists. I think that the Greek TV lacks something like that. A channel with spectacular, breathtaking shows, where there will also be freedom of speech and expression. In this phase that we are going through, Greece needs that.”

As he told NEO, if he did a show like that the range of his impressions would increase. “Of course I couldn’t resist showing David Bowie meeting Makis Psomiadis in the Underworld,” he says and goes on to imitate the former deputy of SYRIZA and supporter of the …drachma, Kostas Lapavitsas. In addition, some of his main choices would be the Prime Minister Alexis Tsipras and the President of the International Monetary Fund, Christine Lagarde. “Oh, I must not forget Eukleides Tsakalotos” he adds, imitating the characteristic voice of Minister of Finances.

Although these days he’s not regularly on TVs, in his free time he watches other satiric shows. “I watch Radioarvila and Ellinofreneia and I like them a lot. I have known Thimios Kalamoukis and Manos Voularinos for many years, since I worked for the SKAI radio. They are both very talented.”

However, George Mitsikostas the person is different from the satirist who transforms himself into a politician, a journalist, a singer and spreads laughter to his viewers. “As regards my private life, I always try to be balanced and not to be as funny as I am in my professional life. The comedians laugh very rarely and sometimes people find it weird. I find the popular jokes with the Pontians and Toto disgusting, I never liked them,” he says.

He finds the moments of filming a show particularly amusing. “The unexpected incidents that occur during filming the shows are what we all remember in the end. I have had a great time with my colleagues and many times laughter lasted for hours”.

But how easy is it to laugh in such a difficult phase like the one that Greece is going through in the last years? “I am experiencing the crisis with optimism and extroversion, because this situation prevailing in Greece, leads us inevitably into isolation, which on its turn, results in depression,” he states, emphasizing that the crisis is an opportunity. “I believe that in such difficult periods, one has to come up with new ideas. Certainly, the crisis creates opportunities, given that you keep your mind alert, you never rest and you always think of something new. We need innovative and pioneering ideas”.

I want to do a stand-up comedy act with the title, ‘What I wanted to say but I was not allowed to.’ It’s going to be a in both Greek and English, which I would like to present in Greece and – why not – in the USA and in any place of the world where Greeks live.

These days, he is gearing up for new ventures. The only thing he told us is that he wants to do a stand-up comedy act with the title “What I wanted to say but I was not allowed to”.

“It’s going to be a performance in both Greek and English, which I would like to present in Greece and – why not – in the USA and in any place of the world, where Greeks live”.

Having made a brilliant career in satire, he gives his own advice to the young people who want to follow a profession in this field. “Being able to imitate different individuals is not enough.” he says. “In my opinion, those who want to satirize, had better study dance, phonetics, be able to sing and speak many foreign languages. I am hung-up on this. I would like to speak at least three or four languages, cause then I would be able to make a career abroad”.

All in all, traveling is very important to him as inspiration for his work. “If I had started traveling when I was still younger I would be much more successful and happy with my work.”