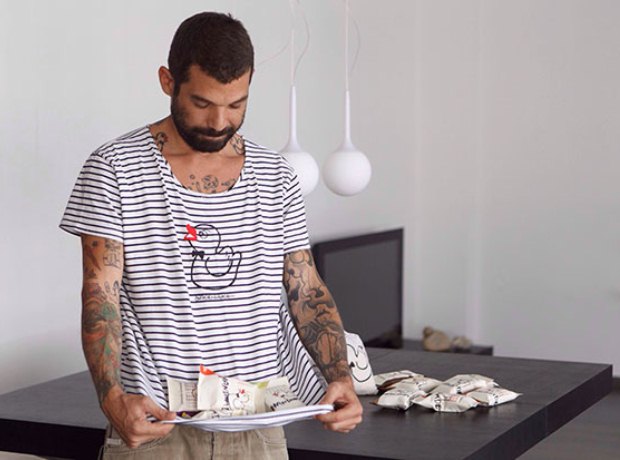 Published at NEO magazine
When successful people get asked how they accomplished something brilliant despite the hardships they faced they usually respond, “There is, no I can’t. There’s only, I want to.” This also seems to be the philosophy of 40-year-old Vasilis Douros, who started his own business in Tripolis in central Peloponnese just when the Greek economy was tanking.

Greek companies always had to face a myriad of obstacles—but Vasili defied the odds with a product you never imagined would sell in a country with plummeting salaries and ballooning unemployment: a handmade soap called “Snob Duck.” And it’s not only flying off the shelves in Greece, but also being exported to Europe and America–so apparently he beat the odds.

It began when he first learned about how the women of a village in Tripolis used to make soaps and decided to try it himself. Even though his own background was in music and retail—though he did work for ski companies, so he knew something about risk.

“It all started with plain curiosity,” he tells NEO. “And when I first came up with the idea, I thought this was a way to use the remaindered olive oil from my family’s olive grove. So I did, and I was excited by the whole process, because I had the chance to tinker with many different materials and do whatever I wanted.”

That was the start of a new professional journey for him, which he couldn’t even imagine years ago. Now he has orders from all over Greece, he exports his soap to New York, Cyprus, Germany and Spain, and he has willing suitors in famous multinational companies and interviews with the major media from all around the world, such as Monocle and The Wall Street Journal. And he did this in only five years totally on his own and through only the buzz in social media.

“Until now, I‘ve had no partners I do everything on my own,” he says. “The soaps are totally handmade. The ‘one man show,’ as I like to call it, has both advantages and disadvantages. One of its negative aspects is that I have no time to travel, visit expeditions, increase the number of my customers and meet the customers I already have. Personal contact and the pursuit of new market pathways are always necessary. On the other hand, I am the boss of myself and this is the dream of many working people.” 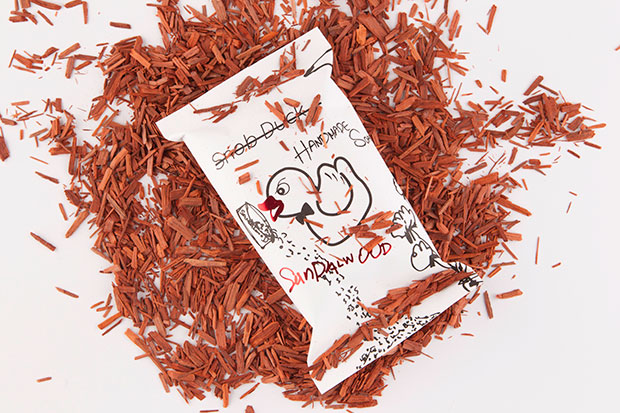 “I use the cold method for my products. I use two bases. The first one includes the oils I use, like olive oil, coconut oil and almond oil, and the other one includes water and caustic soda. Sometimes I use fruit or herb juices instead of water. When I mix these materials I blend them slowly and ‘saponification’ starts. This means that, soda reacts with the oils and the soap begins to thicken, it becomes more viscous, like honey.”

He then puts the mixture in molds and lets it sit a whole day, until it becomes solid. The next day, he cuts it into pieces and puts it on shelves to mature. Maturation is necessary because all the liquid substances must evaporate, so that the soap is ready for use.

Recently, he launched something very innovative for Greece: the one-use soap. This is thin bars of soap, melting on the body during a bath, and sold in a metallic box. As Vasilis told me, this is the first time something like this has appeared in Greece.

What makes Vasili’s story remarkable is how a boutique soap like this could attract so many loyal customers, particularly in Greece, who could have chosen a soap a lot more economical.

“I know it’s a luxury nowadays, but luckily I have many customers,” he says—with a grateful smile. Many of them, in fact, send him messages saying they haven’t used any other soap or shower gel since they tried his.

“Many people come in contact with me and this is also my own aim–as I always ask my customers about their opinion on my products. I want to receive feedback and ask them what do they like and what they don’t, because apart from the personal contact, which is a very important element, but difficult to find in our days, I also want to improve myself: to know what people want and what they don’t.”

The success of Snob Duck soaps, both in Greece and abroad, is due to one man’s hard work, but also to his faith in the product and his own vision.

“Although it all started as an experiment, when I decided to do it, I was persuaded that it would have success. Of course I don’t feel like a mentor, or like somebody who can give advice, but I was really confident about myself and I believe that this was one of the most important factors that contributed to that success of the Snob Duck soaps.”

Another reason for the popularity of his products could be the quality of the materials he uses, which are 100% Greek. “My soaps contain what I also put on my kitchen table. I never use materials of inferior quality.”

Including the packaging, which he supervises himself, because he knows it’s the first thing his customers see.

As for the name Snob Duck: it was inspired by his stint living at the ski resort in Kalavryta. “I used to live next to a guest house with many ducks in the garden. Every morning when I left home to go to work, they would follow me, but at the same time, they didn’t let me go close to them. That’s how I got the name. And, we also shouldn’t forget that ducks are a symbol of cleanliness.” 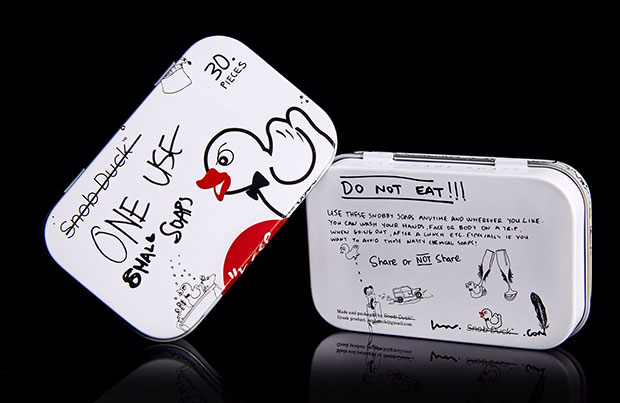 “Of course there are difficulties, but…”

Having accomplished something special in times so tough, Vasilis seems the right person to ask for advice, about young people who might have new ideas but are afraid to take the leap, or been discouraged by the high unemployment and difficulties the new generation in our country has to confront.

“The only thing I have to say is that there are indeed many problems for a businessman in Greece. Endless bureaucracy, high taxation, and many other obstacles for a person who wants to create something of his/her own, and it can easily disappoint them and make them give up. But are inactivity and nagging the solution to our problems? Of course, they’re not.”

Working hard, being persistent and paying attention to quality are some of the “secrets” that can make a business plan viable and successful, he says. But also that he didn’t compromise, for example by accepting the offer of an American multinational when he knew his product wasn’t ready for market.

“When you create something totally by hand and pay so much attention to quality and design you’re just not interested in selling just to make money. You have to keep the quality of the product high so people can trust you and keep on trusting you.”

His future plans include increasing his workforce, so that he finally has time to travel, expand to new markets, and find new customers.

“I believe that I’ll be able to move on to the next stage,” he says, with the same assurance that brought him this far. “I thank all those who trust in me and I promise to do my best so that my products remain of the highest quality, but at the same time affordable for everyone.”