The handcrafted shoes called The Workshop that have conquered Europe, America and Australia in only their third year on the market could be a Hollywood success story.

It all started when twin brothers Alex and Jason Hatzianastasiou, together with fraternal friend Vasilis Alagianis, decided to create some espadrilles and show them to their friends. After all, they had the skill: when they were kids they used to spend hours in the small factory on Iolkou Street in Nea Ionia helping their father with his work. And Vasilis usually came along.

To show off their new handcrafted Workshop shoes to friends they made a Facebook page, but they never expected what happened next: the first orders from their friends came within a few hours and as time went on there came more and more orders. Two months later, the first shoe store in Greece approached them to stock their shoes, and with their workload increasing, the three friends quit their day jobs to dedicate themselves to Workshop.

Of course, it was a huge risk — in a country in crisis and with rampant unemployment. But they did it, anyway: Alex quit being a computer programmer, Vasilis quit working for his father’s construction company, and Jason quit being a designer for a large fashion chain.

But they did it and the results have been astonishing.

“I could never imagine that the espadrilles we made one evening would be the beginning of such a fascinating and creative journey,” the friends and partners say. “We feel very lucky for what is happening to us. Of course, we worked hard and we grabbed the chances we had.”

I met them in their small factory which practically buzzed with their own excitement.

“We cannot describe our joy when our clients send as messages and ask us to make shoes for them or thank us because they were satisfied by our products,” says Jason. “We do something with a lot of pleasure and whenever we see that our creations get popular, it gives us a lot of satisfaction and strength to carry on.”

But they’re happiest when they see people actually wearing their shoes. This summer they had a thrill when they saw a group of three girls at a café, all wearing Workshop sandals. “We literally become like little children when we see somebody at the street wearing them. We nudge each other saying, Look, look, what they‘re wearing!”

Of course, it’s hard to support such large ambitions in the narrow limits of the Greek market. That’s why Workshop has sprouted wings and is now sold all over Europe as well as places like Finland and Russia. It is also collaborating with outlets in the United Arab Emirates, Canada and Australia, and last summer it got requests from U.S. stores.

“Undoubtedly, the recognition of our work is our greatest reward but we don’t want to focus absolutely on these proposals and neglect our Greek clients,” says Vasili. “We want our next step to be stable and show respect to both our local and foreign clients. We want our movements to be very well-organized and help us go forwards and not backwards.”

That’s why Workshop is working with stores from all over Greece, even while fielding orders online from all over the world. Their main exposure comes from social media, particularly Facebook, where their page has more than 40,000 followers. “It is a fact that the internet has helped us a lot, but I believe that other companies also benefit from it, because it is a rapid and direct means. One sees your job, likes it and gets in contact with you immediately” says Jason. 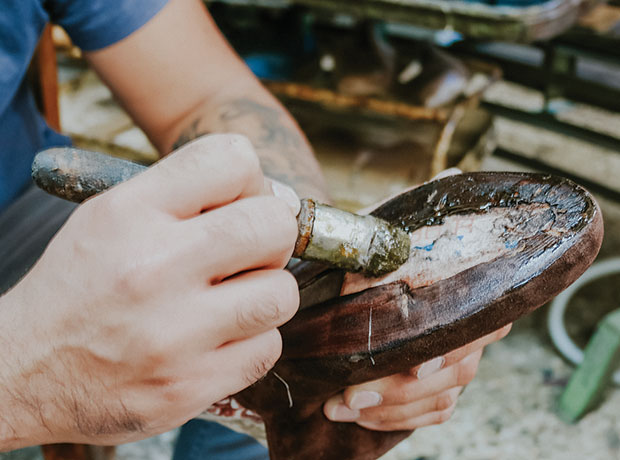 One of the main characteristics of Workshop shoes is that they are exclusively made in Greece, from raw materials to the handcrafting of the final product. But with factors like the country’s high taxation, Workshop is vulnerable against the products imported from countries with a more developed economy or countries with lower production costs.

When asked if they would sell cheaper shoes at cheaper prices to stay competitive their answer is nonnegotiable. “When you want to support the economy of your country there are few alternatives. I mean, a product can’t be as competitive as a product coming from China. So we try to offer qualitative shoes at low prices, as much as it’s possible. We are not going to change that in order to become more competitive”.

Cost of production, of course, cannot be denied. “If the final price of a pair of boots is 300€, we won’t make it, because there won’t be any buyers. Even if the result is going to be very attractive, we’ll withdraw.”

In Greece during the financial crisis, where investments have dropped more than 80% in the last seven years, it‘s at least impressive to see young people succeeding in such a short time.

So what’s the secret of their success?

Apart from hard work, they say it’s the chemistry and bond among them. That’s obvious when you talk to them. “If we didn’t feel that way towards each other, we doubt if we could accomplish all this.”

The answer came a bit later when Alex, Jason and Vasilis explained that one of their priorities is building and preserving a personal relationship with each client.

“It means that if a client is not satisfied with a shoe that he bought from us, we can talk about it, we make the necessary changes and we want him/her to leave totally contented. Buying our products, being discontented and not getting in contact with us to discuss it and see what we can do, is the worst thing for us” says Alex with disarming honesty.

This personal contact they want to have with every customer is reflected in in the scale of their repeat buyers. Workshop refurbishes even shoes with normal wear so they can be worn again. “We want people to understand that we do have just a workshop and not a factory of massive production that produces millions of standard designs. Everything is handmade, and created with love, and our goal is that nobody is dissatisfied.” 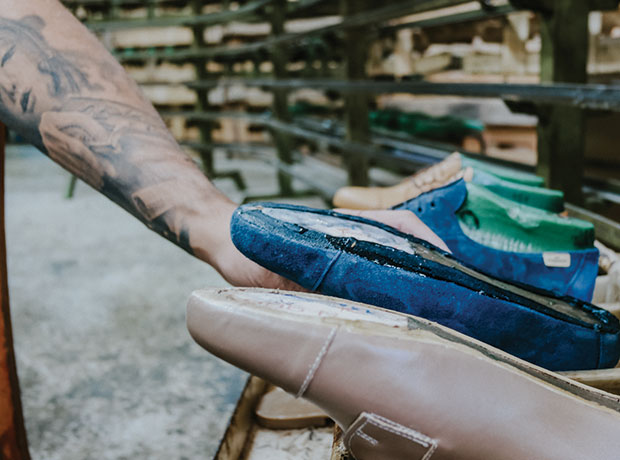 During our interview they were constantly getting phone calls from clients of any age and that made me think of the natural question to ask: “What can the future of the young people be in a country which is collapsing day by day and killing the dreams of millions of people?”

Each one of them had a different message to convey, but they all agreed that hard work can show you the way to reach your dreams–an opinion much more optimistic than my own.

“We live in a time that young people turn towards the jobs that they would snub some years ago. For example, a parent who was a farmer would urge his child to study and become a scientist. Nowadays, many scientists go back to the farm, become farmers, and many of them become successful,” says Alex, stressing that living off the land might have a lot to offer if you’re willing to work hard.

Vasilis, who worked many years in road construction with his father and also in quarries in Africa, is the most restless person in the group.  He told me he couldn’t imagine how a young person without work can just stay home or waste his time at the cafe talking about the difficulties of Greece. “Greeks tend to blame others for their problems. Of course the situation is unpleasant, but young people must look for ways to bring an income home. Possibly at the beginning they won’t find what they are looking for, but they will certainly meet people who may be useful to them for their next job, where they will meet other people and so on. I believe that nothing can stop somebody who really wants to succeed. For some time you might have to do what we call odd jobs, but in the end, you will achieve your goal”. 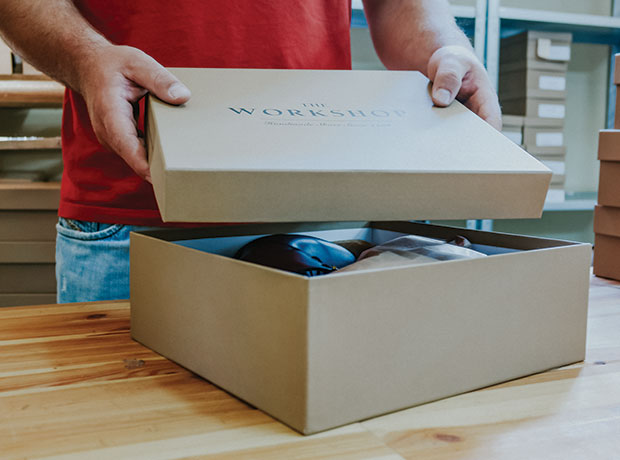 Jason says he doesn’t let disappointment discourage him. “We must always be alert and keep our eyes open to grab at chances. After all, this is what we did. When we realized that people liked our work we took advantage of it and with a lot of work we got here. Nothing is taken for granted.”

Their work is not work because they love it, but they’re also grateful to the people who helped them along the way. “We are very happy with what is happening: something that started as a hobby and finally became a job. We feel the need of saying a big thank you to all those people who have supported us and believe in us. Times are not easy, there is a lot of competition out there and we are really grateful to all those who have chosen us to make their shoes.”