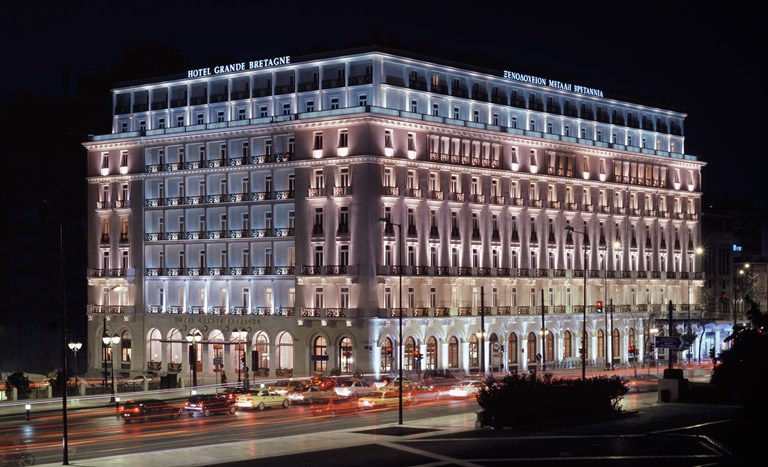 The monarchy is long-gone in Greece but the Grande Bretagne Hotel is still the acknowledged queen of Athens hotels, located in the very crossroads of its modern history. An architectural masterpiece right next to Syntagma Square, and across from the Greek Parliament (formerly the Royal Palace), the hotel is the most prestigious and award-winning in the country and it still dominates the square with its baronial grandeur.

And while history has teemed all around it the hotel has remained a bulwark of stately elegance. It all began in the middle of 1866 when a former farmer named Savvas Kentros established a small hotel business under the name “Grande Bretagne” at Karagiorgi Serbias street, a few meters below the current location.

Then a decade later, when the home of a wealthy businessman from Limnos named Antonis Dimitriou was demolished, the hotel relocated to that spot. Kentros’ partner in this new venture was Efstathios Lampsas, a keen entrepreneur who bought the building in 1888.

The building is like the grandest of wedding cakes and it has known the grandest of moments and history’s personalities: anyone and everyone from the world of politics, shipping, business, law and diplomacy. From Aristotle Onassis, to the Kennedy family, the Grand Duchess Eleni of Russia, the German composer Richard Strauss, and American presidents Dwight D. Eisenhower and Lindon Johnson are just some of the great personalities who have passed through the sumptuous lobby of the hotel.

And it has hosted historic moments: in the basement of the hotel was delivered the war communiqué that introduced Greece into the war against the Axis. Immediately afterwards, an evacuation of the rooms was ordered to install instead various military and civilian services and a wartime staff of 40. 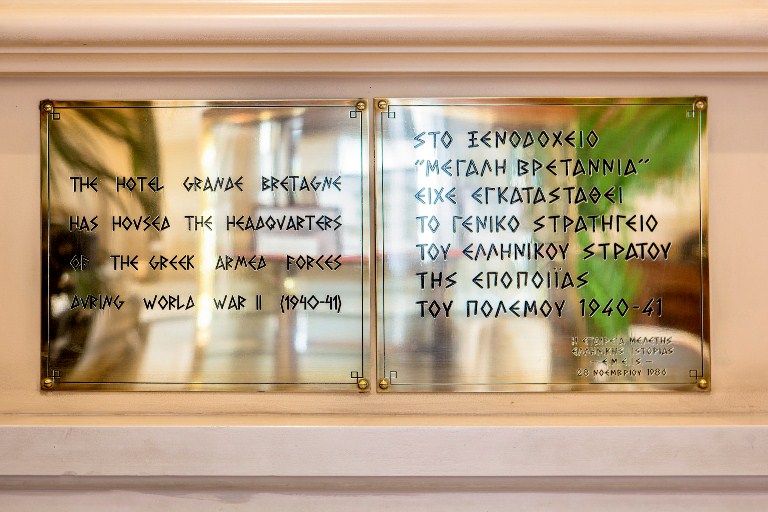 At the end of the Nazi Occupation in 1944, the hotel, like the country, went through numerous upheavals including hosting members of the National Unity government elected in the fifth floor suite, and Konstantinos G.  Karamanlis residing in the hotel for four months after the end of the military dictatorship. Another important moment for the hotel was the message that Archbishop Makarios delivered from the balcony on the second floor to the Greek people after the invasion of Cyprus. Most recently, the Grande Bretagne bore witness to the demonstrations in Syntagma Square against austerity measures.

The hotel is still the grandest jewel of Athens with 270 rooms and 37 suites that can satisfy even the most demanding visitors from all over the world. The luxury, the excellent service, and the historical importance of the hotel are unparalleled. However, for both the hotel and the city of Athens as a whole, peace is also good and the hotel now as before remains a bastion of civility.

This is one of the reasons that according to Grande Bretagne’s managing director Mr. Timotheos Ananiadis, the bookings have increased steadily over the past two years. “There is an increase reaching the levels of 2007 and this happens not only in our hotel but throughout Athens,” he told NEO. “Now the city is not the focus of foreign media due to protests as it has been before. This has resulted in visitors feeling safe and choosing the Greek capital more easily for their holidays.”

What distinguishes the hotel most is its service, including the award-winning spa which combines luxury with the unique aesthetics of the Grande Bretagne. “When the last major renovation of the building took place, our aim was the creation of a tourist hotel in the center of Athens that would include all the amenities any visitor would need,” says Mr. Ananiadis and adds: “We decided to create a high capacity spa, with its own indoor swimming pool, steam room, and anything related to the relaxation of the client.”

Equally impressive and equally relaxing is the Roof Garden, where guests can enjoy their meals or a drink while enjoying the views and companionship of the Ecumenical Historical Memorial of the Parthenon, Lycabettus, or the whole cityscape of Athens. “It is a hotel that after its last renovation in 2006 became ultramodern while retaining its historicity. We built a place in the center of the Greek capital, which is really an oasis in the bustling city,” Mr. Ananiadis explains with pride. 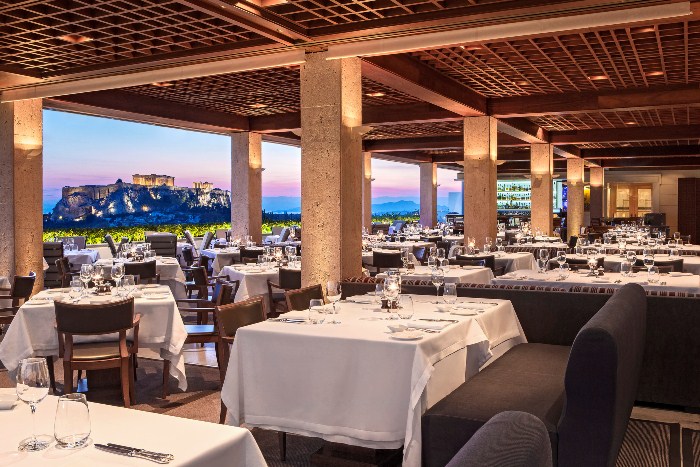 Apart from the award-winning spa and the impressive roof garden, the area dominated by the hotel lobby is just as important. It is the Alexander Bar that offers a unique aesthetic experience to its guests. This specially designed spot is dominated by a rare tapestry of the 18th century depicting the entrance of Alexander the Great in Gaugamela. This particular place was voted by Forbes magazine as the best hotel bar in the world.

According to the hotel’s managing director, during the last renovation the building was designed to make the visitor aware of its history. “In the winter garden there is a stained glass one 100 years old on the ceiling,” he says. “It is part of the old hotel and provides external lighting giving the visitor the feeling that he is not in the interior. This completely changes the whole image of space.”